Testing a racecar is one of those things that are simultaneously loved and hated by race teams.

Engineers love it. It's their chance to check their work and gather data for their next big technical achievement. Even if the car breaks, it teaches them something new. Drivers hate testing. It's boring, repetitive, and it forces them to suppress the competitive instinct that makes them good racers. If the car breaks, you sit on the sidelines and wait around until something changes. The only part that everyone agrees on is that testing a necessary part of running a racecar.

For a small team with a limited budget, track testing is both a necessity and a luxury. Because of this, StudioVRM.Racing does almost all of our driver training away from the track, opting for cheap rental karts and a routine of regular mental imagery exercises in lieu of expensive track outings. Like sim racing, it's a mediocre substitute for doing real laps in your own car. But it works. Unless you have to test out new hardware of course. So we ventured down to NJMP's Thunderbolt track one day early to run the official SSCA test day prior to the Summer Thunder race weekend.

People say that social distancing takes the fun out of events, but I think it helps at these types of events. Contactless check-in and socially distanced tech made administrative chores a cakewalk and no one complained when we set up our paddock spot hundreds of feet from the next team. My oversized mask prevented me from picking up painful sunburns on my face while a lack of social commitments meant I could rest in the comfort of a pop-up tent kept cool by a Walmart box fan. Testing requires focus, and the conditions were perfect to do exactly that.

And boy did we need to focus. Just 1.5 laps into the day, course workers called the Prelude back to pit lane with the orange and black flag. The right front hood pin had parted from the body, allowing the carbon fiber hood to flap wildly at speed. Rush back to our paddock, install a spare pin, and trundle back to grid... only to be stopped at the entrance. It took a minute for me to be able to see why. On the other side of the pit wall, a Trans Am 2 Camaro sat stranded on the entry to pit lane. A team of panicked grid workers swarmed upon the stricken Chevrolet, manually pushing the massive car clear before another driver could come in and slam into it unsighted.

A few short minutes later we were released back on track, right behind a pair of Spec Miatas. Perfect. Spec Miata racers tend to not waste time warming up, so they won't hold us up in the early sessions. All we have to do is to follow them through the corners for half a lap to get the tyres and brakes up to temperature. Then make an easy pass down the main straight... or not.

Instead of unleashing the ~200fwhp promised by the dyno, the Prelude's new H23A1 rumbled like an old 3-valve tractor engine and refused to rev. It was an ugly sound, something between a spun bearing and a combustion chamber that was filled with gravel. Time to lift, coast, and crawl to the paddock. 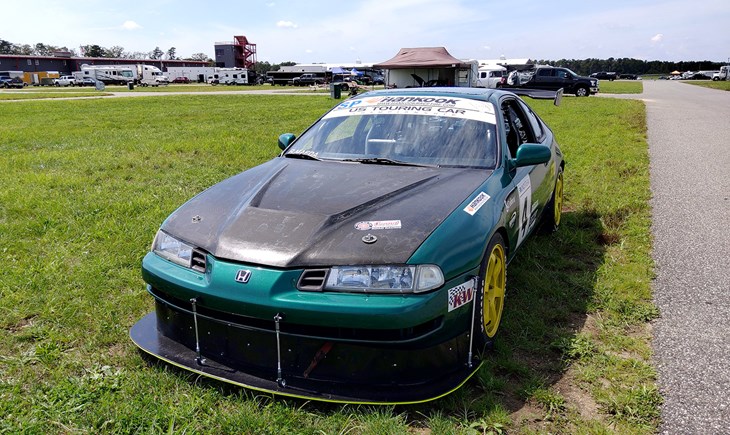 This truncated first session would set the tome for the rest of the day, a litany of passages from the book of trial and error:

Park the car, lift the front end in the air, and discover that the motor was ingesting oil due to an overfilled oil system. Drain 1.25 quarts of engine oil, fire it up, notice an odd misfire. Find a loose injector clip, secure all of the injector clips with zip ties, go back out for the second session. Immediately come back in after hearing the splitter scraping under braking. Come back in, find that one of the splitter mounting bolts have fallen out. Scramble around, discover that we don't have any M12x1.75 bolts in the hardware kit, hack together a fix, go back out. Notice that the engine still had no power, come back in.

By noontime we had completed just 8 laps and were no closer to finding the cause of our biggest problem. We repeatedly checked the usual culprits - spark plugs, TPS, MAP sensor, Main Relay, injectors, and ignition module, all to no avail. Aside from a few spots of white on the spark plugs, there was little to indicate that there were any issues.

It took until the fourth session of the day to find a meaningful clue - The display on the AEM air fuel ratio gauge started going blank whenever we put load on the engine. Pulling the oxygen sensor revealed part of the problem - Some unburnt engine oil had made its way all the way through the engine and had fouled it. Calls to local auto parts stores revealed that none of them had the Bosch 17025 we needed (although they all seemed to have the similarly numbered but physically incompatible Bosch 17205).

But a bad oxygen sensor didn't seem like the sole cause for this problem. Most ECUs are tuned to ignore the oxygen sensor under full throttle, and ours is no exception. Fortunately, several mechanically inclined friends* saw my vaguely disappointing Facebook updates and started troubleshooting our issue remotely. The conclusion? Our 27-year old OEM Honda fuel pump was on its last legs. With the day coming to an end and no spares on hand, we made the decision to withdraw from the race and head home early.

Thus ended our first track outing of the year. The StudioVRM Prelude is back in the garage, waiting for the arrival of a Walbro 255LPH fuel pump and a replacement Bosch oxygen sensor. I'm watching the Indy 500 in the comfort of my home when I'm supposed to be sweating it out in the heat of an on-track battle.

Yes, it's annoying, and yes I would have liked it to have spent the weekend differently. But at the end of the day, the team can seek solace in the fact that at least this didn't happen on race day.

So yes, I'm ok with how this test went. On to the next one.

Thank you Chris Nickolite, Ross Shull, Chris DeShong, Greg Amy, Todd Reid, Robert Oliver, Charlie Greenhaus, and Don Stellhorn for your help in diagnosing the problems this weekend. Although Mechanical issues ended my weekend early, thanks to you it didn't end in disappointment. 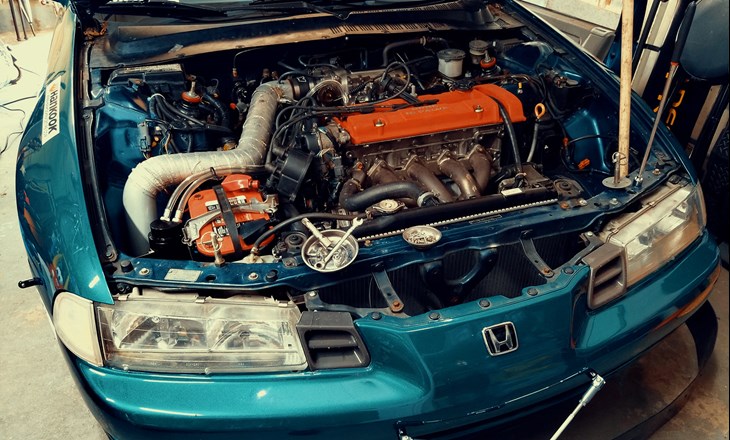